Altadore is a residential neighbourhood in the inner-city portion of the southwest quadrant of Calgary, Alberta. It is located between 14 Street and Crowchild Trail, south of the neighbourhood of South Calgary. It is bordered by the Elbow River and the River Park to the southeast.

Altadore was named one of Calgary’s best neighbourhoods in 2010 for its proximity to River Park, one of Calgary’s best parks on the Elbow River, and Marda Loop, the largest and busiest outdoor shopping area in Calgary, and for having a vibrant party and cultural scene. The Marda Loop Business Revitalization Zone is located within the community, along 33 and 34 Avenues SW. The neighbourhood is experiencing a gentrification process with many high-end, luxury semi-detached homes built in the last ten years, favoured by trendy, young professionals and families.

Altadore was established in 1945. It is represented in the Calgary City Council by Ward 11 Alderman Brian Pincott. The community has an area redevelopment plan in place.

The meaning of “Altadore” is unclear It may have been named after a mansion in County Wicklow, Ireland, or it may have been a portmanteau word whose first part derived either from “Alta”, the old abbreviation of Alberta, or “alta” for high (the neighbourhood being on a hill), and whose second part was derived from “dore”, a version of the French “d’or”, or “of gold”. 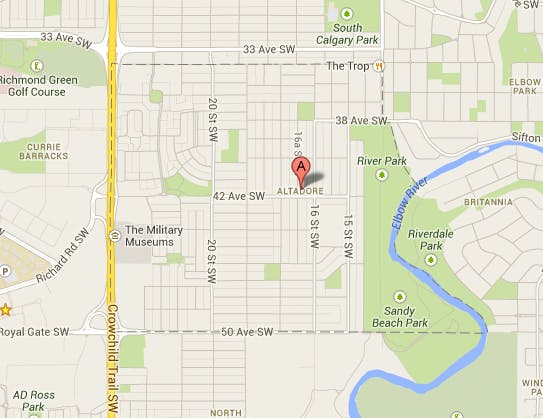