The key component of smart homes and home automation is the Internet of Things (IoT). It has allowed us to connect our devices and home appliances with each other with the help of internet. Not only does it connect your smart devices, but everyday home appliances such as lights, doorbells, fans, windows, and clocks can also be controlled by smart technology. All of these devices can connect, communicate, take your commands, and send you information while at the same time perform their key function. To learn about the 5 upgrades that might intrigue you click HERE.

END_OF_DOCUMENT_TOKEN_TO_BE_REPLACED

A rare find in the highly desirable community of Sunnyside. This 3 storey property with a garage is inner city living at its finest-Fantastic views from all levels located on a quiet street! You will love entertaining in this well thought out open concept floor plan with plenty of natural sunlight from your South facing windows. Special features are numerous: renovated kitchen w/ convenient eating bar (lots of counter and cupboard space), cozy fireplace, skylight, built in wall units, upper level laundry, spacious master bedroom with a ensuite (enjoy soaking in your jetted tub w/ stunning views). Yard includes a BBQ area & plenty of room for all your toys in the garage plus storage. Ability to control low condo fees due to self management of complex (fees include lawn care & snow removal). Windows, doors, stucco & roof have all been recently replaced . Minutes to the river paths, walk to downtown ,Safeways, Starbucks, pharmacy trendy Kensington restaurants shops and bars and Eau Claire market. 1004 1st AVE NW Calgary $615,000. If you are interested please contact Doug, Susan or Kristen www.penleymcnaughton.com 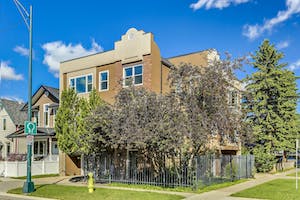 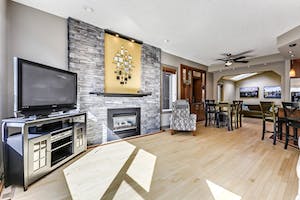 This story is about a luxury yacht with expected amenities — such as gorgeous sun decks and elegant eating areas — but also a high-tech twist or two.
Created by London-based architect Jonathan Schwinge, the Tetrahedron Super Yacht’s unique design is based on a three-based pyramid shape. But beyond the vessel’s four faces and six leading edges (which provide greater stability), it actually appears to float above the water — thanks to a single vertical strut on a torpedo hull that remains underwater.
According to Schwinge, the yacht will lift above the water (at speed) on side-mounted, adjustable hydrofoils. This enables the vessel to travel smoothly — even in choppy waters — and reduces seasickness by eliminating any rocking or heeling.
The yacht features a take-off speed of 15 knots (17.2 MPH), and can reach speeds as high as 38 knots (43.7 MPH) above the water line. Its range is 3,000 nautical miles.
Schwinge believes that his design will reshape the “modern superyacht” into a simple enclosure that can function as “an elevated mode of travel above the water line.”
While there is no price tag on the Tetrahedron Super Yacht, it’s easy to see that this kind of vessel would be coveted by high-tech fans who can afford such a luxury item. 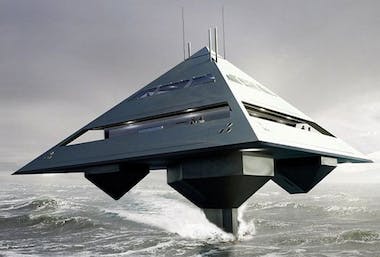 For some, a dream home is a gorgeous mansion with acres of beautiful greenery. For others, it’s a elegant penthouse in an urban skyscraper. For Florida widow Lee Wachtstetter, it’s a 1,070-passenger luxury cruise ship — the Crystal Serenity.
During her 50-year marriage, “Mama Lee” (as she’s known aboard the ship) went on nearly 90 cruises with her husband. And during her eight-year stay aboard the Crystal Serenity, she’s done nearly a hundred more, plus 15 world cruises. After her husband passed away, Wachstetter decided to sell their five-bedroom, 10-acre home in Fort Lauderdale and make her new home in a “location” that she had grown to love — the ocean.
Although she admits that her single-occupancy, seventh-deck stateroom has “limited” space, Wachstetter enjoys all of the amenities of the Serenity, which set sail on its maiden voyage in 2003. Approximately $164,000 a year covers her cabin, regular and specialty restaurant meals (with beverages available at lunch and dinner), gratuities, nightly ballroom dancing with hosts, and Broadway-type entertainment. In addition, there are the captain’s frequent cocktail parties, movies, lectures and other scheduled daily activities.
And this isn’t Mama Lee’s first “home” aboard a cruise ship — she previously lived for three years on a Holland America ship. But when they discontinued their dance host program — she’s loved to dance her whole life — she decided to “move” to the Crystal Serenity. After all, the Crystal Cruise Line is always rated among the world’s best, and the Serenity is their newest ship.
And Wachtstetter enjoys the communal dining experience of a cruise ship, regularly sitting at a table for eight and making new friends. Of course, with all of the delicious culinary options on the menu, she confides that she’s working on losing a few extra pounds that she gained since coming on board.
Most days, Mama Lee can be found doing needlepoint in the Palm Court lounge — it’s “her second love.” Everything that she makes, she gives to staff members of the 655-person crew; in turn, they have become like family to her, providing a near-concierge-level of service.
She’s able to keep in touch with her three sons and seven grandchildren via her laptop computer. And whenever the Serenity docks in Miami — as many as five times a year — she visits with the family members that live nearby.
Mama Lee isn’t the only full-time resident on a Crystal cruise ship — there are three others living a similar lifestyle. But Wachtstetter has been doing it the longest. She credits her late husband, who told her “Don’t stop cruising” before he passed away. Today, Mama Lee claims that she’s living a “stress-free, fairy-tale life.” 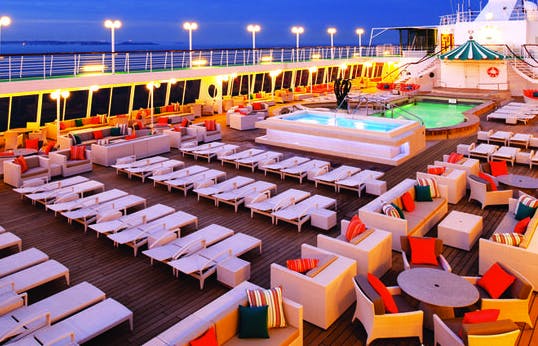