It is a BIG today! Trade, immigration, pipelines, security and environment are just a few of the issues that the next President Elect will face that effect Canada directly.  Each are proposing different agendas for the U.S. that pose questions, opportunities and challenges to cross-border relations. The world will be watching this historical election!
Click here or on photo to view full article 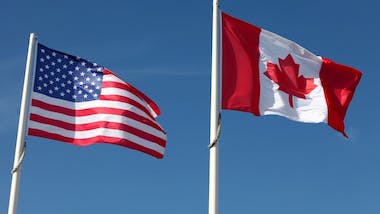 Natural Resources Minister Joe Oliver landed here Monday to sell the Keystone XL pipeline only to find a capital awash in a rising political crisis over Syria that has flushed the contentious pipeline, along with most other issues, into the deep beyond.
Oliver met for an hour with Ernest Moniz, a nuclear physicist and environmentalist who became U.S energy secretary in May. Among the topics of discussion were Keystone XL, reducing the environmental footprint of non-conventional oil production such as the oilsands and sharing energy and environmental technological research, Oliver said.
Keystone XL, which is expected to transport more than 800,000 barrels of oil a day primarily from the oilsands, remains key to the oilsands expansion strategy. This visit marked Oliver’s fifth official trip to sell the project.
Once again, Oliver contended at a subsequent news conference that Canada is doing its best to reduce oilsands greenhouse gas emissions. While he emphasized that emissions per unit of production have decreased, he acknowledged overall emissions continue to rise.
He again noted Canada has aligned its overall reduction goals with those of the U.S. These include a 17 per cent reduction of 2005 levels by 2020. Oliver said Canada is about halfway there, adding oilsands companies are working to reduce to zero the emissions difference between oilsands and conventional oils.
He said the discussion involved technologies, not policies, that could reduce its greenhouse gas footprint. “Our goal is to reduce entirely that differential,” Oliver said. “We don’t regard the proposed policies as concessions.” He refused to comment on a recent letter sent to U.S. President Barack Obama by Prime Minister Stephen Harper that purportedly offered greater emission reductions should Obama approve the Keystone XL project.
Oliver said Canada must improve its greenhouse gas record so it can obtain society’s support – what he called a “social licence” – to continue to develop oilsands resources. He denied that any new commitments amount to “concessions” to the U.S. With or without Keystone, Oliver said Canada will “continue to aggressively pursue the markets to assure that the Canadian energy industry can take advantage of the world’s fastest growing economies.”
Despite rising U.S. oil production, U.S. energy figures predict the U.S. will still need to import 7.4 million barrels a day by 2035. “The Keystone pipeline will help meet that demand,” he said. “For America the Keystone XL represents a secure, stable source of energy.”
He said North America “can be energy independent within the next 20 years.”
TransCanada Pipelines has been seeking approval for the $5.3-billion Keystone XL project since 2008. The final approval rests with Obama.
Oliver said he did not ask about when Obama will make the final decision. Reports suggest it will not be before 2014.