8000 sq. ft. of M-/CG d72 development land on a prime Memorial Drive Sunnyside corner location. 710 5a Street is to be sold with 612 Memorial Drive. Consultation with the City of Calgary has suggested that they would allow 5 brownstone units . Sturgess Architectural can provide consultation and recommendations on design and rezoning to maximize the units that could possibly be constructed on the site. The home on 5a street is currently rented. Any viewings are to be with realtor present and conditional on an offer. Be an investor in the outstanding community of Sunnyside. $1,500,000. Contact Doug McNaughton for more info www.penleymcnaughton.com. 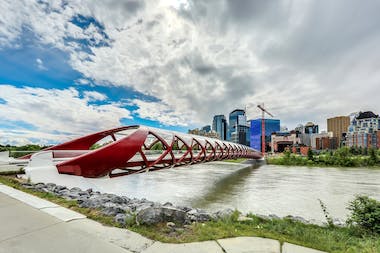 In the wake of the largest flood in Alberta history, the Tory government announced a sweeping plan to move homes and businesses out of the areas most in danger from a deluge and to flood-proof other areas at risk from rising waters.

But many of the details of the province’s initiative have yet to be nailed down, and the impact on communities such as Calgary and High River is still uncertain.
In a rare Sunday news conference, Municipal Affairs Minister Doug Griffiths announced the province will ban new development in floodways — the areas subject to the most destructive flows in so-called “100-year floods.”
The province will allow — and pay for — the repair and rebuilding of damaged homes in floodways, but it will not pay for damages from future floods on refurbished homes in those zones, he said. If a property owner chooses to relocate, the province will provide financial assistance for a new home.
Premier Alison Redford said in an interview that the government is trying to provide “the most choice with the least impact,” but acknowledged the policy will mean tough choices for some homeowners.
“There are people who have homes on the floodway that they love and we’re saying, ‘really, if you want to choose to stay there, you have to understand there are consequences.’ That’s going to be hard for people to hear, but I also think that most people are going to realize that makes sense,” she said.
In flood fringe zones — the portion of hazard areas outside of the floodway — the government will pay for repairing or rebuilding homes affected by the recent disaster, but will require flood-proofing such as berms, water control infrastructure or raising the structure.

The government will pay an additional 15 per cent over replacement costs for flood-proofing measures on individual homes in some cases. In other instances, broader municipal flood mitigation efforts will suffice, but that will only be determined through consultation with municipalities, Griffiths said.
If no flood-proofing takes place, homeowners will not be eligible for disaster assistance in the case of a future inundation. Homeowners in floodways and flood fringe areas across the province who weren’t affected by the recent flooding in southern Alberta and Fort McMurray won’t be relocated and will still be eligible for assistance in case of future flooding.
Griffiths acknowledged the province has no estimate of the number of houses affected by the new policy — though he says the amount located on floodways is small — or the cost involved. The Progressive Conservative government announced an initial $1-billion for flood relief and reconstruction, but said more money would certainly be needed for a disaster estimated as causing multiple billions of dollars in damage.
Mayor Naheed Nenshi said he knows the government had to move quickly but he was surprised that such a major policy shift would take place without consultation with municipalities.
While he doesn’t disagree with the government’s intent, Nenshi is concerned about how the government will determine what properties fall within each category, saying there are differences in expert opinion over what areas should be considered floodways and what should be designated flood fringe areas.

“Our city is built at the confluence of two rivers,” he said in an interview.
“We really need to know what we’re talking about here. We ended up evacuating nearly 100,000 people, a 10th of our population, and we really need to understand what the province is talking about when we use those terms.”
Bowness, Elbow Park, Mission and Sunnyside were among the neighbourhoods hardest hit by the flooding, which began on June 20.
Nenshi noted that both the Bow and Elbow Rivers have carved slightly new courses because of the flood, requiring updates to flood mapping.
Griffiths said the province will use its existing flood hazard area maps, subject to some tweaking, to determine who falls where.
He noted that some neighbourhoods that suffered the worst flooding in High River — the town that has suffered the most from the catastrophe — have never flooded before and have not been considered part of either a floodway or flood fringe zone. What to do in cases like those has yet to be determined, he said.
Griffiths also could not say whether residents in floodways that choose to leave damaged homes will be compensated for their land, as well as the cost of their homes. He said the province will work with municipalities on a “case-by-case” basis on the issue.
“We fully understand these policies come with extensive considerations and while we don’t have all the answers to all the individual situations faced by Albertans today, we’re working as quickly as possible with municipalities to finalize the details,” said Griffiths.
Griffiths said the province will also require notification on land titles for properties in floodways and those in flood fringe areas that have not been protected against flooding.
Wildrose party Leader Danielle Smith, who represents High River as Highwood MLA, said she wanted to see the government commit to investigating the causes of the flood.
But Smith said she is in agreement with the broad outline of the government’s plan.
“What they are proposing at first blush seems to be practical,” she said.
“But what I worry about is that they’re putting almost 100 per cent of the blame and the responsibility on homeowners to solve this problem. In my opinion, there are some big, important infrastructure decisions and mitigation decisions that need to be made by the federal and provincial and municipal governments.”
With files from Don Braid, Calgary Herald